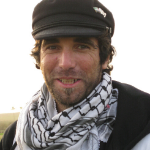 Although not registered with the professional association Arrigoni worked as a journalist.

Vittorio Arrigoni – known as Vik – was a human rights activist, writer and blogger. He was born in Brianza and lived in Bulciago (Lc). A graduate in accounting, he worked for a short time in the family business. At the age of twenty, he participated in humanitarian cooperation missions that brought him, first to Eastern European countries, then to Peru and Africa. In 2002 he joined the NGO International Solidarity Movement, took an interest in the Palestinian cause, the humanitarian situation in Lebanon and the occupied territories moving to the Gaza Strip. In 2005, without being informed, he was put on the black list of people unwelcome to Israel. He returned to Gaza in 2008 and received honorary Palestinian citizenship. He began to write articles from Gaza, for Il Manifesto, for Peace Reporter, The Electronic Intifada, Radio Popolare, and Caterpillar. From July 2004, he published the blog reports Guerrilla Radio and gained international notoriety. In those years Vittorio was the only Italian reporter in the field who covered the Israeli offensive called “Molten Lead” between December 27th 2008 and January 18th 2009 with thousands of Palestinian victims. Immediately afterwards he published the book “Gaza. Let’s Remain Human “, a collection of his reports from Gaza, which was also published in English, Spanish, French, German and Arabic, with the addition of a postscript by the Israeli historian Ilan Pappé. The greeting “Let’s Remain Human” accompanied all his reports and is still often used in his memory today. On April 14th 2011, a commando kidnapped him as he exited a gym in Gaza. In a video posted on YouTube he is shown blindfolded and bound. The following day Vittorio was killed. He was 36 years old. The reasons remain unclear.

Several songs have been dedicated to Arrigoni: