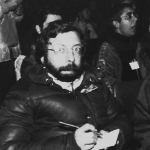 Guido Puletti was born in Argentina. His father was an Italian emigrant from the province of Perugia; his mother had Spanish and English ancestors. He studied in Italian and English high schools in Argentina and grew close to the groups of the Peronist left. After the advent of the military dictatorship in 1976 he paid for his political and trade union commitments with prison and torture and in 1977 he was expelled from Argentina, together with his wife and two children. He moved to Italy where, in 1981, he began his career as a journalist writing for the Bresciaoggi newspaper, collaborating with news agencies and periodicals,  travelling  the world and establishing himself as a specialist in international politics and economics. Between 1989 and 1991 he focused his attention on the profound political and social upheavals in Eastern Europe. The war in the former Yugoslavia becomes central to his journalism and political analyst activities. He died on May 29th 1993, just 40 years old, in Bosnia, during the conflict in the former Yugoslavia. That trip to Bosnia, which was not the first, was aimed at carrying out a solidarity project to aid the cities of Vitez and Zvidovici. It had been agreed that from Zvidovici five Italian volunteers, including Guido Puletti, would take by bus 62 people comprising widows and their children away from the war and to Italy. Near Gornji Vakuf the humanitarian convoy was assailed by the paramilitary “Green Berets” under the command of  Hanefija Prijc known as “Paraga”, who made the five volunteers descend, and escorted them to a nearby clearing to shoot them. Two managed to escape but Guido Puletti, Sergio Lana, a 21-year-old student from Gussago and Fabio Moreni, a 40-year-old entrepreneur from Cremona, died. In September 1998, the Italian Justice Ministry recognized the massacre as a “political crime”.

Taken from the collection edited by Monica Andolfatto for the book Day of Remembrance of Journalists killed by mafias and terrorism, Rome, 2008

Taken from the introduction to the volume: Guido Puletti, The world that is not there, Datanews, 1996, edited by Cinzia Grolla and Francesco Germinaro

(Update by Alberta Del Bianco and Grazia Pia Attolini, May 3, 2020)