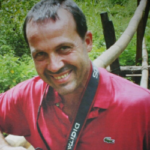 Fabio Polenghi was 48 when he was killed in Thailand. He was born in Monza in 1962 and in the words on the website dedicated to his memory “he had chosen early the world as his home and photography as a kaleidoscope to describe its thousand different realities: from fashion to reportage in forgotten places”. . Fabio was killed on May 19th 2010 in Bangkok, hit by a Thai army bullet. As the bravest freelance photojournalists do, he was documenting, alongside the weakest, the final phase of the protests of the anti-government movement, the “Red Shirts”, which for two months had called for early elections.
That 19th May the army with a bloody assault said the final word on weeks of clashes that had already caused dozens of deaths and injuries on both sides. In fact, the army made the final assault on the place where the demonstrators were encamped, in the centre of the capital. Fabio fell, hit in the heart by a bullet and died following an improvised transport on a motorcycle, to hospital. Three other journalists were injured the same morning, a Dutchman, a Canadian and an American.