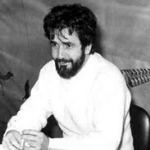 Mauro Rostagno was a multifaceted individual: sociologist, journalist, political activist with an eventful life. Born and raised in Turin, at the age of 19 he married and had a daughter. He then left his wife and travelled to Germany and France. Rostagno returned to Italy and in Trento enrolled in the faculty of sociology where – with Marco Boato, Renato Curcio, Mara Cagol and others – was very active in the Student Movement. In 1969 he was among the founders of Lotta Continua. In the seventies Rostagno was an authentic anti-authoritarian leader. After the dissolution of Lotta Continua, the Milanese alternative club “Macondo” started up.  When it closed, Rostagno went to India and when he returned in 1981, he set up  the Saman community near Trapani for the recovery of drug addicts. Rostagno also worked for the local radio station Radio Tele Cine through which he strongly denounced the collusion between the Mafia and local politics. On the evening of September 26th 1988 Mauro paid for his social passion and courage with his life.

Rostagno was assassinated inside his car in a Mafia ambush in the Lenzi district, not far from Saman. He was 46 years old.