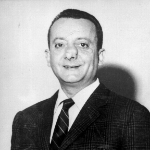 Born in Foggia in 1921, a deputy police commissioner in Rome in 1943-44, Mauro De Mauro,  after the Second World War moved to Palermo where he devoted himself to journalism revealing himself as an excellent reporter for several newspapers before finally arriving at L’Ora. In 1962 he had covered  the tragic end of Eni’s president, Enrico Mattei, and in September 1970 he was again dealing with the case on behalf of the director Francesco Rosi for his film The Mattei Affair which was released two years later. On Wednesday 16th  September 1970, at 9 pm, De Mauro was about to return to his home in via delle Magnolie, a residential area of ​​Palermo. His daughter Franca saw him talking to some men, then getting back into his BMW and leaving. The car was found but there was no trace of De Mauro. Years later, some mafiosi turned state witnesses said that the journalist was killed by order of the Cosa Nostra. The case is not yet closed. It is believed, in fact, that the murder was carried out to block De Mauro’s investigation into the death of Mattei. Yet another theory points to a hypothetical coup by the “black prince” Junio ​​Valerio Borhese whom De Mauro regarded as the  commander of the Decima Mas (special Italian Navy forces).

(from Remembrance Day of journalists killed by Mafia and terrorism, 2008)

In over 50 years it has not been possible to find either his body, or to ascertain on the judicial level those responsible for his disappearance in Palermo on September 16th  1970. It remains a profound mystery. Numerous investigations and trials have identified a role of Cosa Nostra but failed to attribute the responsibility to the Mafia boss Totò Riina or to other Mafia members. Some light has been shone on the  context at least on a journalistic level. Among the various investigative tracks, the most trodden one concerns the investigation that the journalist was conducting on the tragic death of ENI president Enrico Mattei in a plane crash in 1962. The other track, equally followed, but without success, leads to the possible revelations that the journalist could have made about the Borghese Coup which was attempted two months later. The trial history speaks of misdirection and “tampered” evidence and evokes a scenario in which organized crime, obscure powers, secret services and dubious individualsmove behind the scenes. This is the timeline: