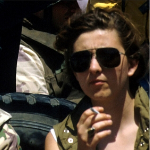 Professional journalist. She was officially recognized as a special correspondent after her death

Her last scoop – the discovery of a nerve gas deposit in an abandoned Taliban base – had appeared on the front page of Corriere della Sera on the day of her s death, which took place on the road connecting Jalalabad to Kabul. The car in which Maria Grazia Cutuli was traveling with three colleagues – an Australian, a Spaniard and an Afghan – was blocked by a group of armed men who first made the journalists get out, then killed them in bursts of fire from Kalashnikovs. The four bodies were recovered the next day. Maria Grazia, 39 from Catania began her career in 1986 in the newspaper La Sicilia, then moved to Sud, a regional weekly that dealt with television connected to the regional TV station Telecolor International with which Cutuli had collaborated. Then she transferred to a journalism school in Milan, followed by the professional exam, being hired at Centocose and then at Epoca. The broad horizon of her interest, not only journalistically, in international politics, takes her to Rwanda – on a year’s leave from the newspaper – a working interlude with UNHCR, the United Nations agency that deals with refugees. In July 97 she moved to Corriere della Sera.  For Corriere della Sera. Maria Grazia was a special correspondent without having the formal qualification which was only attributed to her after her death.

IN AFGHANISTAN – The Afghan authorities have identified three culprits who have been tried and sentenced. In the autumn  of 2004, 29-year-old Reza Khan, accused of the murder, was sentenced to death. Although the journalist’s family had declared their opposition to this punishment, Khan was shot in October 2007. The other two are Mamur son of Golfeiz and Zar Jan son of Habib Khan, both of Pashtun ethnicity. They are referred to as “son of” because there is no official registry of births in Afghanistan.

Both were sentenced to 16 and 18 years of imprisonment respectively.

IN ITALY – The trial began in 2015 at the Court of Assizes in Rome. The defendants are the two Afghans Mamur and Zar Jan who are already serving their sentences in Afghanistan. The two are accused of complicity in robbery for having taken  together with others still unidentified, a radio, a computer and a camera that belonged to Maria Grazia Cutuli, and of complicity in murder. For the journalist’s death, Jan Mar was acquitted in the past for doubts about identification, while Fedai Mohammed Taher and Jan Miwa were acquitted for lack of evidence.

2017 – In November 2017, in the first instance, the two defendants were sentenced to 24 years in prison. The two were connected by videoconference from a prison in their country of origin. The Assizes court  also inflicted on the two damage compensation to the journalist’s family and to the newspaper’s publisher RCS for a total of 250 thousand euro. The Prosecutor had asked for 30 years: “We have arrived close to the sixteenth year after the events  – he said in the indictment – and this makes this trial  not easily understandable, but from the beginning there was the clear will of the Italian State to proceed and identify the perpetrators of this criminal act, but also to renew the trial in Italy “. For the prosecutor, “the crimes with which we are dealing have been qualified as political crimes, and the legislation allows this trial to be held again in Italy”. The elements collected, according to the prosecutor, made it possible to ascertain that “an organized plan was created for the spoils2. It was a daring, sensational operation.

Mamur confessed and implicated  Zar Jan. “Evaluating all the elements we have, the only possible reconstruction is that the two are responsible for the crimes of which they are accused, beyond any reasonable doubt”. Among the witnesses appearing in the trial was the former head of Digos (the Italian Special Branch) , Lamberto Giannini, director of anti-terrorism at the time of the hearing. Giannini said: “The Afghan authorities told us that the Taliban paid by the Pakistani secret services terrorized Westerners to prove to the world that the foreign military coalition had by no means acquired control of Afghanistan and Kabul. In this context, according to the Afghan authorities, the murder of Maria Grazia Cutuli was part of this policy of terror “.

2018 – On November 15th  2018, the Court of Assizes of Appeal, chaired by Andrea Calabria with Giancarlo De Cataldo, confirmed the sentence of 24 years in prison for the two Afghans who had appealed. The advocate  Paola Tuillier, the lawyer of the Cutuli family, on the side-lines of the hearing, expressed satisfaction with the sentence. “This trial  – she said – was due to those who sacrificed themselves for their country, who went to Afghanistan aware of the risks they ran, to respect the fundamental right of freedom of the press, the cornerstone of democracy. It is a result that our country deserved “. Prsent in the courtroom were the brothers of Maria Grazia, Donata and Mario . Satisfaction was also expressed by the lawyer Caterina Malavenda, RCS lawyer. “With the confirmation of the first degree sentence, the political nature of the murder of Maria Grazia Cutuli has also been confirmed”.

In her memory were established: