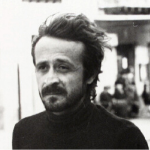 Born in Cinisi, 30 kilometres from Palermo, to a Mafia family, Giuseppe Impastato (Peppino for relatives and friends) still a young man, broke away from his father and started an anti-Mafia political-cultural activity. In 1965, at the age of 17, he founded the magazine L’Idea Socialista and led the struggles of small farmers, construction workers and the unemployed. In 1976 Impastato created Radio Aut, a free self-financed broadcaster with which he denounced the crimes and affairs of the Mafia of Cinisi and neighbouring Terrasini. The most popular program was Onda Pazza, a broadcast in which Peppino mocked mobsters and politicians. In 1978 he ran for municipal elections on the Democrazia Proletaria (Proletarian Democracy) list. Impastato was assassinated on the night between the 8th and the 9th May 1978 with a charge of TNT placed under his body lying on the railroad tracks. He was 30 years old. At first there was talk of a terrorist act in which the attacker himself had been killed, then of suicide. But thanks also to the activities of the Centro Impastato, the Mafia background to the crime was finally identified. On March 5th 2001, the Assize Court of Palermo sentenced the Mafia boss Gaetano Badalamenti to life imprisonment and his deputy Vito Palazzolo to 30 years in prison.

The places of remembrance

After the death of his mother Felicia, in 2004 “Casa Memoria” becomes “Casa Memoria Felicia and Peppino Impastato”. In 2013, after renovations, it was transformed into a real museum with unpublished documents and materials, a meeting place, a bookshop and an exhibition area. Today it is a “secular altar”, as Umberto Santino, president of the Impastato Centre defines it: a place where memory meets commitment and culture, where the ideals of freedom, social justice and truth live on.

In 2010, the house of the Mafia boss Gaetano Badalamenti which had been earlier confiscated,  was assigned to the Peppino Impastato association for cultural and social purposes.

In 2012, also thanks to the committed reproach and awareness  of Giovanni Impastato, Peppino’s brother, the Sicilian Region started the process of expropriation, for public use, of the land and the cottage in the Feudo district, where Peppino was killed, in order to make it a site of commemoration. In 2014 it was declared a place of cultural interest. In January 2020, the expropriation procedure moved into an implementation phase. According to the agreement between the Region of Sicily and the Metropolitan City of Palermo, it will become the “National Cultural Centre for the Fight against the Mafia”.

After Peppino’s death, his mother Felicia Bartolotta distances herself from the mafia context of the family, forming a civil party against the mafia. From that moment, until her death (2004), Felicia devoted herself entirely to the commitment to defend and transmit the memory of her son and to the struggles to obtain justice. Among the relatives of innocent Mafia victims of the Libera association, Felicia Bartolotta becomes the most popular individual and her example is often cited by Don Luigi Ciotti, a leading advocate of Libera. Around her, her son Giovanni, Peppino’s companions and the members of the Sicilian Documentation Centre, a movement of ideals has developed over the years in Cinisi that today unites thousands of people who carry on the battles of Peppino Impastato.

Groups, associations, collectives, cultural initiatives, songs, drama productions,  books, newspapers, and even streets, squares, parks and schools have been named after him throughout Italy.