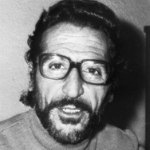 A law graduate, in 1952 Pippo Fava became a professional journalist and began to collaborate with various regional and national newspapers. In 1956 he was hired by Espresso Sera. He also began writing for the theatre and the cinema. In 1980 – the year in which the film, Palermo or Wolfsburg whose script he wrote, won the Golden Bear at the Berlin Film Festival – Pippo Fava left Espresso Sera and took over the editorship of the Giornale del Sud in Catania. In November 1982 he founded the monthly I Siciliani and published investigations in which the collusion between the Mafia, politics and business was exposed. At 10 pm on January 5th 1984, Pippo Fava had just left the editorial offices of his newspaper and was going to pick up his granddaughter who was acting at the Teatro Stabile in Catania. Fava did not have time to get out of the car and was killed by five 7.65 calibre shots to the back of his head. Only a few people attended his funeral including the president of the region of Sicily Santi Nicita. In 2003, the Supreme Court sentenced Nitto Santapaola, the instigator of the crime, to life imprisonment.

In 1980, as director of the Giornale del Sud newspaper, Pippo Fava began an unprecedented editorial experience in Sicilian publishing, characterized by investigations into the links between politicians, local entrepreneurs and organized crime, represented by an irreverent journalism towards the notables of Catania which demanded an answer to their connivance and collusion. The newspaper reconstructed the building pillage of the city, the clambering of the Mafia for the most lucrative contracts and the resignation of honest individuals. For these initiatives, the journalist was subjected to censorship by the publisher and to threats and attacks. In the end, Fava was fired and a few months afterwards the newspaper ceased publication.

In 1982 the editorial experiment of I Siciliani began, a monthly founded and self-financed by Pippo Fava himself who made it the instrument  to report  without omissions and in detail the underworld of a most corrupt and complacent Sicily, depicted as a metaphor for a world where events go unnoticed: the devastation of the environment, the nuclear trap of Comiso, the challenge of the Mafia. He had already dealt with such themes in his literary activity and now he dealt with them as news and with the rigour of the journalist. I Siciliani was an investigative  monthly across the board: politics, current affairs, sport, entertainment, customs, art.

In the short period when General Carlo Alberto Della Chiesa was appointed Prefect of Palermo with the task of accentuating the fight against Cosa Nostra, the investigations of I Siciliani had a strong impact on Sicilian politics and on the fight against the Mafia, turning the spotlight on the Mafia in Catania hitherto in the shade.