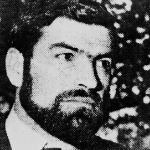 Alfano was killed with three pistol shots by a lone killer whilst at the wheel of his car driving home. He was 42 years old, he was a technical teacher and for passion he was, without any professional protection, the correspondent of the Catania newspaper La Sicilia.  Beppe Alfano, therefore, was not a journalist registered in the Order of Journalist (he was registered posthumously  as happened with Peppino Impastato and Mauro Rostagno), but he had the passion and intuition of the thoroughbred reporter. He had begun an investigation into an international arms trade that passed through the Messina area had begun; he had perhaps also contributed to the capture of the crime boss Nitto Santapaola in 1993 and he had written about  a devious freemasonry that speculated in the traffic of oranges exploiting European subsidies. In short, with his denunciation articles Beppe Alfano exposed the links between organized crime, polluted politics and business groups.

Beppe Alfano tore open the blanket of hypocrisy over the presence of the Mafia in Barcelona Pozzo di Gotto and in the province of Messina. For everyone, in the 70s and 80s these are “dozy” areas, immune from criminal penetration. Sonia Alfano, in this regard, writes in her book “The shadow zone”:

“Because there was no Mafia in Barcelona, right? It was a quiet area, where nothing happened, like in the rest of Messina: the province of Santa Claus, the only corner of the region where people were so dumb that they couldn’t even be criminals. (…) [My father] also knew that everyone pretended, that they remained silent and made themselves accomplices. But he was convinced that he was not the only one who wanted a light to be shone on it, even though no voice was raised in that desert. Perhaps, he thought, someone needed to take the first step. That was how he decided to start talking ”.

Alfano, with his journalistic inquiries, drew the organizational chart of the gangs of Barcelona and Messina: an activity that would prove very useful to investigators in challenging the emerging gangs of the 90s.

His journalistic activity was mainly aimed at businessmen, fugitives from justice, politicians and local administrators and Freemasons. His investigations published in the newspaper La Sicilia revealed connections between the Mafia, business and politicians.

Alfano came very close to discovering the safety network around the fugitive Catania boss Nitto Santapaola, who was allegedly hid in the vicinity of Barcelona Pozzo di Gotto. He shed light on the arms and drug trafficking of the Mafia with South American countries, wrote about some scams against the European Union in the sectors of citrus fruit cultivation and cattle breeding and investigated the roots of Masonic lodges in Messina and Barcelona .

Another investigation conducted by Beppe Alfano, until shortly before his murder, concerned the scandal of the AIAS (Italian Association of Spastic Assistance), a private assistance structure for the disabled that obtains substantial funding from the Sicilian Region, whose managers had important ties with local and regional political representatives at the time. As reported by Luciano Mirone in his investigative book “Insabbiati” (the cover-ups)- and as emerged during the first hearing on the Alfano murder – it seems that the journalist had shed light on the mismanagement of AIAS by its executives, dedicated to lax recruitment for personal gain, and fraud related to the number of patients not corresponding to those actual hospitalized.