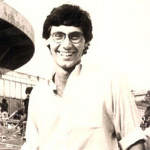 A journalist, he was waiting to be permanently employed by his newspaper, but the hiring came only after his death. At a very young age, Giancarlo Siani began to collaborate with some Neapolitan periodicals, taking an interest in the problems of the world of work and marginalised individuals , the main labour force of the organised crime syndicate, the Camorra. Then Siani started working as a correspondent from Torre Annunziata for the newspaper Il Mattino which relied upon the separate editorial staff based in Castellammare di Stabia. Siani carried out important investigations on local bosses, an excellent piece of reporting that led him to become correspondent for the newspaper within a year and to have the promise of a formal contract. Giancarlo Siani, in the article published on the 10th June 1985 – an article that the prosecutor Armando D’Alterio who led the investigation into his murder, regarded as his death sentence – wrote that the arrest of the boss Valentino Gionta was possible due to a “tip-off” from the Nuvoletta clan to the police. In fact, Gionta the boss of Torre Annunziata had been arrested in Marano, Nuvoletta territory. Siani’s intuition had provoked the wrath of the Nuvoletta brothers who, in the eyes of the other Neapolitan bosses, were made to appear treacherous. On September 23rd 1985, shortly after turning 26, Giancarlo Siani was killed at 9.50 pm. He had just left the central editorial office of Il Mattino whose chief editor at the time was Pasquale Nonno.

(Source: Unci – the national union of Italian reporters- with the contribution of family members)

Twelve years had to pass before dealing with the causes that had led organized crime to take Siani’s life. The truth was obtained thanks to the investigations conducted by the young Prosecutor of the Italian Republic Armando D’Alterio together with the “flying squad”  of Naples.