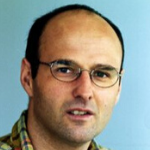 Gabriel Gruener, 35, a Germanophone Italian journalist, originally from Malles (Bolzano), had studied at the University of Innsbruck (Austria) before starting in 1991 to work for the German weekly Stern, where he had established himself as a special war correspondent. An expert on the Balkans, Gruener had covered Slovenia, Croatia, Bosnia and Serbia, but also other hot, or rather incandescent spots in the world: Somalia, Afghanistan, Algeria and Sudan. He was a young man of great courage and professionalism. On June 13th 1999, Gruener and his German colleague Volker Kraemer, a 56-year-old photographer, also from Stern, were at a checkpoint at the Dulje Pass, in Western Kosovo, when they were hit by gunshots from a sniper, one of many who haunted that tormented region. Kraemer died instantly, Gruener instead died in a hospital in Macedonia where he had been transported in a condition that seemed desperate from the outset.

(Update by Raffaella Della Morte and Marta Ramadori, 3 May 2020)