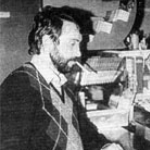 Dario D’Angelo was born in Barcola (Trieste) in July 1947. His family moved to Prosecco where he lived for the remainder of his life. Passionate about music, he performed as a drummer as a young man. At the end of compulsory schooling, he leaves and becomes an apprentice electrician. Whilst on leave during military service he meets Gianna, his classmate who became his wife. A daughter Nataly is born. Dario began working at the blast furnace of the Servola steelworks and qualifies as a technician in telecommunications. The opportunity to try to make a big leap presented itself when the RAI of Trieste announced a competition for a recording assistant which Dario won. In those years, the RAI headquarters in Trieste was the base which followed the major crisis that developed in the Balkans after the fall of the Berlin Wall.

He completed his first mission in a hazardous area in the summer of 1990, in Slovenia. Then he worked alongside the journalists sent to follow the Albanian crisis and the war in Croatia and Bosnia. This last mission was unsuccessful. The crew had left for Mostar but had not been able to enter Bosnia. And so in January the crew tried again. Dario had a bad feeling. “I’m going to say goodbye to Prosecco,” he said to his wife and daughter the night before departure, going out to get some fresh air. A few days after January 28th at six in the evening two colleagues from RAI rang at the door of the house in Prosecco. Nataly opened and her world fell apart.

D’Angelo and his colleagues were victims of one of the intense and daily bombings to which East Mostar was subjected. This is the most plausible hypothesis of the death of the Rai team. Following the attack, an investigation was opened and immediately closed. The presence of journalists and media workers in East Mostar was known, having had to pass several checkpoints before entering, but the investigations did not reveal precise responsibilities regarding their deliberate killing by the Bosnian-Croatian forces.