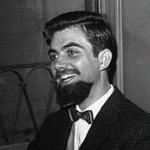 Publicist journalist since 1958, correspondent for Ora of Palermo and for the Ansa News Agency, collaborator with Corriere della Sera, with Il Giorno and with the Gazettino of Venice. In 1960 he created Prospettive Siciliane (Sicilian Perspectives).

He was 24 years old and was a correspondent for the newspaper L’Ora of  Termini Imerese. He had written articles and investigative stories on the links between the Mafia and politics in the Madonie area. On May 3rd ,around 11 in the morning  Cosimo Cristina left the house well-dressed, with his customary bow tie, freshly shaved and fragrant. In the evening, having not seeing him come home, his parents and three sisters began to worry.  Cosimo had still not returned to the family.

after two days of gloomy, profound, absolute desperation after unsuccessful searches by relatives, friends and the police. The corpse of the young reporter was eventually found at 15.35 on the 5th May along the Palermo-Messina railway line, between the Termini Imerese and Trabia stations. His father, an employee of the Railways, heard on the radio the news of the presence of a lifeless body on the train tracks and rushed to the site of the discovery.

For years, the suicide hypothesis was followed and in the 1990s the case was re-opened, but a different judicial explanation for his death was not found.

It took almost 30 years from his death summarily classified as suicide, for a discussion to begin about the young journalist Cosimo Cristina and his journalistic activity. A process of revelation and rediscovery by a small town which  had buried him “without a funeral” in 1960. For justice system it was a matter of suicide but for those who knew Cosimo Cristina and for those who studied his life it was instead a murder, a Mafia murder.