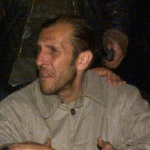 Antonio Russo was a freelance reporter with solid experience in Algeria, Burundi, Rwanda, Colombia and Ukraine. From 1995 he worked for Radio Radicale for whom he went to Kosovo where he remained, the only western journalist in that region during the NATO bombings, until March 31st 1999 to document the ethnic cleansing of the Kosovar Albanians.

Antonio Russo died on the night between the 15th  and 16th October 2000 in Georgia, where he was a Radio Radicale correspondent to witness the war in Chechnya. He was 40 years old. His lifeless body was discovered on a country roadside 25 kilometres from Tbilisi, having been tortured with techniques attributable to specialized military units. The material he had with him – videotapes, articles, notes – was not found, even his accommodation in Tbilisi had been burgled (without the valuables having been touched). The circumstances surrounding his death have never been clarified. At the funeral that took place in Francavilla a Mare, his hometown, his mother said: “The only thing that consoles me is that it was a death consistent with his life”.

On the death of Antonio Russo two investigations immediately began, one in Georgia and the other in Rome, but the investigations do not lead to anything concrete.