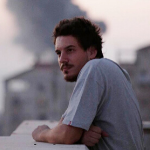 Son of a journalist with the state broadcaster RAI who was also the mayor of Pitigliano, in the province of Grosseto, Camilli graduated in 2006 in history and religious studies at the Faculty of Letters and Philosophy of the La Sapienza University of Rome. In the same period he began to collaborate with various newspapers, first the Catholic news agency Asia News and then Associated Press (AP), with which he collaborated first in Rome then in Jerusalem and from 2014 in Beirut.

He also covered several events in Italy and elsewhere: the French presidential elections in 2007, the celebrations for the Kosovo Declaration of Independence in2008, the second war in South Ossetia in 2008, and the shipwreck of the Costa Concordia off the Island del Giglio in 2012.

In August 2014, he returned to Gaza to document the human drama of the war. That fateful  August 13th was a day of truce between Hamas and the Israeli army.

On the day of his death, the Rome Prosecutor’s Office opened a dossier on it. The investigation was coordinated by the deputy prosecutor Giancarlo Capaldo. The body of Camilli was brought back to Italy on the evening of the 14th  August. To ascertain the cause of his death, an autopsy was ordered which established that the photojournalist died  “from injuries sustained by the explosion”, as reported by an Ansa press agency report on August 16th  2014.

• Gabriele Barbati, Trappola Gaza. Nel fuoco in altri dettagli su crociato tra Israele e Palestina, Inform-ant editions, 2014. Barbati, a friend and colleague of Camilli, had shared with him part of the 2012 war and recounts the experience lived as a journalist in the Gaza Strip during the conflict of 2014.