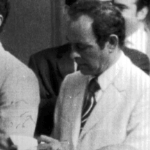 Originally from Syracuse, Francese was shot dead in Palermo, in viale Campania in front of his house. He was the crime reporter of the newspaper Il Giornale di Sicilia, where he carried out an in-depth reconstruction of the most complex Mafia events of the 70s and first published the names of the Corleone bosses who began to climb up the Cosa Nostra hierarchies arriving in Palermo. Francese died on January 26th 1979. Why was he assassinated? In the sentence of the Supreme Court that condemned the perpetrators and instigators of that crime, Mario Francese was described as possessing “an extraordinary ability to make connections between the most significant news events, to interpret them with courageous intelligence, and thus to reconstruct with exceptional clarity and credibility the evolutionary lines of Cosa Nostra “. In addition, the Supreme Court judges wrote that with the elimination of that upright reporter the “season of excellent crimes” had begun. Francese, among other things, sensed and described the beginning of the assault of the “Corleonesi” (as they call the Mafia in Corleone)  to the top of Cosa Nostra. He also reported on divisions within the “Mafia Commission”.

Francese dealt with crime and legal news. He documented the building pillage of Palermo and closely examined the public procurement system. When Cosa Nostra, after the Belice earthquake, took advantage of the reconstruction to enrich themselves, Francese tramped the valley and spoke to farmers, shepherds and artisans.  In this way he learned about the intrigues that lay behind the expropriation of land for the construction of the Garcia dam. Thanks to his “extraordinary ability to make connections” he had a visceral understanding of the strategic evolution of the Corleonese Mafia. He described everything in his investigations. He is the first journalist to mention Totò Riina, to interview his wife Antonietta Bagarella and to name the companies connected to the boss and to talk about the split  in the “Mafia commission”.

A selection of Mario Francese’s investigations and articles is available on the Mario e Giuseppe Francese website.