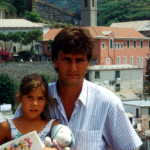 Marco Luchetta was born in Trieste on December 22nd 1952. He entered  journalism at a very young age, dealing with sports for local broadcasters. His  distinctive hallmark was irony. “You can recognize us at first glance. Frenzied eyes, hair standing on end, unshaved: it seems that we dressed while a huge dog chased us …”: he wrote in 1979 in one of his ” Spagine “, the column he wrote in the weekly Telequattro.

He began to deal with current affairs and in 1989 he became a professional journalist. Shortly thereafter Luchetta joined the state broadcaster RAI, in its regional office of Friuli-Venezia Giulia. In 1991 the war in Yugoslavia erupted and as a RAI correspondent he reported on what was happening there. Whenever he returned home and was asked why he accepted such risky missions, he replied: “I go because you can’t let everything pass in silence. We must be witnesses, let people know. Think only of those children … “. In January 1994 he left for Bosnia, for the umpteenth mission, this time with technician Dario D’Angelo and videographer  Alessandro Ota. On January 28th  before returning to Trieste, they went to East Mostar, where a month earlier they had tried unsuccessfully to enter. Marco Luchetta had already done interviews in the western zone  but to complete the documentation he had to go to the other side of the city, where death struck him and his two colleagues.

Luchetta and his colleagues were victims of one of the intense daily bombings to which East Mostar was subjected. This is the most plausible explanation  of the deaths of the team from the state broadcaster RAI. Following the attack, an investigation was opened but was immediately closed.

The presence of Italian journalists and media workers in East Mostar was known, their having passed several checkpoints to reach Mostar, but the investigations did not reveal precise responsibilities regarding the intentionality of their killing by the Bosnian-Croatian forces.