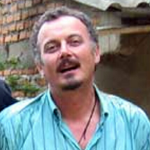 Born in Città di Castello (Perugia), 56 years old, a wife and two children, Baldoni worked for a long time in Milan. After doing various jobs, in 1996 he became a freelance journalist reporting about his experiences travelling around the world on Linus, Specchio della Stampa, the Friday magazine of La Repubblica. Baldoni arrived in Iraq for the first time, with accreditation from Diario, just two weeks before he was killed. He was kidnapped together with his driver Ghareen by the Islamic Army, a Muslim fundamentalist organization linked to Al Qaeda, while he was in a humanitarian convoy towards Najaf. At the end of an ultimatum to Italy for the withdrawal of all troops within 48 hours, Baldoni was killed. The date and the place are still uncertain and his body never returned to Italy. The assassins sent Al Jazeera a video of Baldoni’s execution but the chilling images never shown out of respect for the family.

2010 – At the end of long and complex searches, in April 2010, the remains of the journalist were identified and handed over to the Italian authorities. Already in 2005 an alleged bone fragment from Baldoni had arrived in Italy, but laboratory tests then excluded its compatibility with the journalist’s DNA.

In November 2010, after further DNA analyses which ascertained that the remains were the journalist, the funeral took place in Preci (Perugia).

Several songwriters have dedicated songs to him: