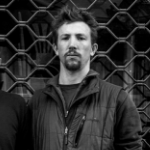 Photojournalist, he was part of the photographers collective “Cesura”, of which he had been one of the founders. Originally from Pavia, Rocchelli, after a specialist degree at the Polytechnic of Milan, worked for the photographic agency Grazia Neri and then travelled extensively in North Africa (in Tunisia and Libya he had followed the riots of 2011), and in Russia and Eastern Europe, areas in which he had a keen interest and where he had documented human rights violations in Kyrgyzstan and Ingushetia. He had also worked on the conditions of migrants in southern Italy and documented their exploitation by organized crime. His photos have been published by Italian and international newspapers such as Newsweek, Le Monde, The Wall Street Journal and Novaya Gazeta. Rocchelli died aged 30. He was killed together with his colleague and friend Andrej Mironov (a Russian journalist and political activist, a member for several years of the Italian Radical Party), near the city of Sloviansk, in Eastern Ukraine, while documenting the conditions of the civilians trapped during the Donbass conflict. The two, unarmed, were hit by mortar fire during clashes between the Ukrainian army and the National Guard, on the one hand and pro-Russian independence activists on the other. With them were a local driver and a French photojournalist, William Roguelon, who was seriously injured.