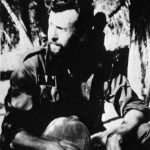 When Almerigo Grilz decided to definitively and exclusively embrace the profession of journalism, he resigned from the post of city councillor of his hometown, Trieste. However he did not abandon that political militancy, always right-wing, which saw him first manager and head of the Fronte della Gioventù  (the Youth Front)  of Trieste, until in 1977 he became a national deputy secretary of the FdG and then a prominent member of the ranks of the Movimento Sociale Destra Nazionale (National Right Social Movement).

From the end of the seventies onwards Grizl was , as he liked to define himself, an independent, freelance war correspondent in the “hottest” territories: from Russian occupied Afghanistan, to a Lebanon opposed to Israel, to Ethiopia devastated by guerrillas, to Cambodia, to Thailand, to the Philippines and to Angola. Grilz’s reports are taken up by CBS, France 3, NBC, Panorama and Tg1. In 1983 he founded with Gian Micalessin and Fausto Biloslavo the Albatross Press Agency that produced written, photographed and filmed reportage in areas of the world afflicted by war or revolutionary phenomena. Four years later, on May 19th 1987, Grizl was killed by a “stray bullet” in Caia in Mozambique whilst filming a battle between the militiamen of the Renamo front and those loyal to the government in charge. Since 2001 Trieste has a small street on the Barcola seafront named after Almerigo Grizl, a journalist.